Aaron Rodgers and the Folly of "Doing Your Own Research"

- November 15, 2021
Researching a topic is good, but the phrase “I did my own research” has become the bane of teachers, actual researchers, doctors and other healthcare providers, policymakers, and even football teams, I wrote in  last week’s column .
Post a Comment
Read more

A Longer Tribute to Burdett Loomis

- November 09, 2021
Burdett was a friend and mentor to me--he deserves a longer tribute than what will fit in a newspaper column. I recently published that longer tribute as my newest MPSA blog entry .
Post a Comment
Read more

A Tribute to Burdett Loomis

- October 18, 2021
My  co-contributor, friend, mentor, and colleague Burdett Loomis died on September 25. His public life exemplified a commitment to civility and to politics in the common good, I wrote with Patrick Miller in a  special bonus column  last week.
Post a Comment
Read more

- October 11, 2021
We must face our country’s history honestly, but today, the culpability of our governments for Native Americans’ COVID deaths are happening because we are doing too little, not too much, wrote Michael Smith in last week's column.
Post a Comment
Read more

Do-It-Yourself Redistricting and What I Learned

- September 08, 2021
Here's what I learned from drawing my own proposed districts for Missouri and Kansas, posted on the MPSA Blog .
Post a Comment
Read more

- September 07, 2021
The 2020 Census data have been released, and we now know that Johnson and Wyandotte Counties combined have many people for a Congressional district. However, this change can be made without completely breaking apart the state’s only Democratic district, I wrote in   last week’s column .
Post a Comment
Read more 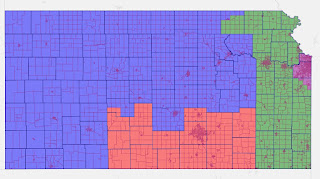 Kansas Current Districts Despite its small size, the Third District near Kansas City is in fact the most-populous one in the state today, requiring rebalancing.  The "Big First" (blue) and Second (green) have lost population. Kansas 2021:  This Author's Proposed New Districts This map avoids a Missouri-to-Colorado Big First and splits only two counties.  No cities are split.  In Johnson County, the cities of Gardener, Edgerton, Spring Hill, and DeSoto move to the Second District along with some unincorporated rural areas.  The rest of the county stays in the Third District with all of Wyandotte County (Kansas City). Kansas 2021:  GOP Gerrymander? Rumors abound that the Republican supermajority may try to split the Third District to eliminate its Democratic-voting majority.  The map below shows what that might look like, with the Big First wrapping around the Second to collect Wyandotte County, while Johnson County, which is now majority-Democratic, is placed in a distric
Post a Comment
Read more
More posts